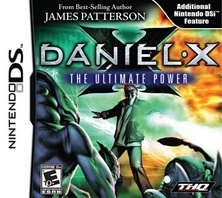 The Ultimate Power is the Power to Create! Daniel X was born with the greatest superpower of all, the power to create. Now, the fate of the world rests on his shoulders saving the world has never been easy, but itâs a fight Daniel is made for.

Create Daniel not only has strength and speed of a super hero but he also has the unique ability to create objects from nothing. The player will use this skill in creative ways to overcome obstacles, save friends and prevent the aliens on The List from taking over the world. Explore Take Daniel through an alien world where he must use his intellect to solve puzzles in unique ways and battle otherworld enemies to get back to Earth. Fight While itâs usually brains before brawn, Daniel can throw down with the biggest baddy when he has to. As an expert in many forms of combat, he can kick, slam, bash and stomp his foes into submission, mixing it up with his alien telekinetic powers for a little extra fun. Nintendo DSiTM Feature Aliens are everywhere Players will use their Nintendo DSi camera to take photos of family and friends. Let the Daniel X Alien Detector to determine who can be trusted and who is an alien.