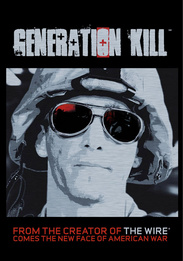 Based on the national best-selling book by Evan Wright, Generation Kill is an authentic and vividly detailed 7-part HBO miniseries event that presents a uniquely epic and intimate portrait of the first 40 days of the Iraq war from the perspective of the Marines of the First Recon Battalion - a new breed of American soldiers. Generation Kill is a humorous and frightening first hand account of these remarkable men, of the personal toll of victory, and of the brutality, camaraderie and bureaucracy of a new American war. It is a profoundly insightful and realistic look at the risk, costs and ultimately, the failures of the war.