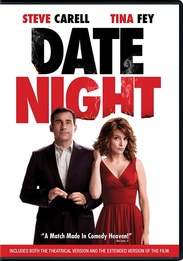 Action-comedy maestro Shawn Levy, the director of the blockbuster "Night at the Museum" franchise, teams up with two of the comedy world's biggest talents, Steve Carell and Tina Fey for an adventure that turns a run-of-the-mill married couple's date upside down -- way upside down, in DATE NIGHT.

Rated PG-13 for sexual and crude content throughout, language, some violence and a drug reference.