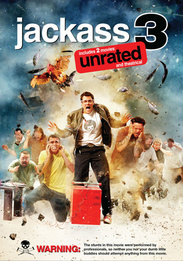 3 times the laughs. 3 times the action. 3 times the pain. The Jackass guys are back for their wildest round of mischief and mayhem yet! Youâll laugh âtil it hurts as Knoxville goes head-to-head with an angry bull, Bam stumbles through a tunnel of high-voltage tasers, and Steve-O takes to the skies in a fully loaded porta-potty. Brace yourself for the unbelievable and totally outrageous stunts from the Jackasses youâve come to know and love!

Rated R for male nudity, extremely crude and dangerous stunts throughout, and for language.