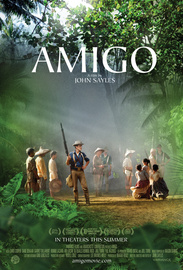 AMIGO, the 17th feature film from writer-director John Sayles, stars Joel Torre as Rafael Dacanay, a village mayor caught in the murderous cross-fire of the Philippine-American War in 1900.

When U.S. troops garrison his village, Rafael comes under pressure to collaborate from the blood-and-guts Colonel Hardacre (Chris Cooper) as he tries not to betray his people. But the situation is complex. RafaelÊ¼s brother SimoÌn (Ronnie Lazaro) is the head of the local Filipino guerillas, and considers any concessions to the Americans to be traitorous. A devious Spanish friar (Yul Vazquez) is charged with translating, but thwarts communication with his spiteful intrigues. A sympathetic American lieutenant (Garret Dillahunt) begins to learn that âhearts and mindsâ cannot be won at gunpoint.

Rafael is forced to make the near-impossible, potentially deadly decisions faced by civilians in an occupied country. Friendship and betrayal, romance and heart-breaking violence, AMIGO is a page torn from the forgotten history of imperialism and a mirror of todayÊ¼s unresolvable conflicts.