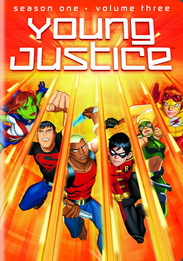 Robin, Aqualad, Kid Flash, Superboy, Miss Martian and Artemis have become YOUNG JUSTICE - The Justice League's secret weapon against the forces of evil. The teen heroes will take on under-the-radar missions that would be impossible for the Justice League to handle covertly. Red Tornado will be their supervisor; Black Canary will be in charge of their training and Batman will hand out their assignments.