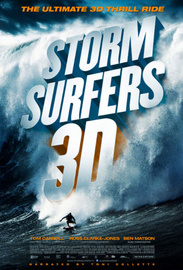 As we meet best friends and professional surfing legends Tom Carroll and Ross Clarke-Jones, middle age is upon them and their children are getting older - but they can't stop exploring the globe for that elusive rush of adrenaline and thrill of danger, in search of the ultimate wave. Using state-of-the-art 3D technology and narrated by Academy-Award nominee Toni Collette, directors Christopher Nelius and Justin McMillan's STORM SURFERS 3D is a visually stunning, inspiring and epic cinematic adventure that follows two men who refuse to put their youth behind them, setting out on a quest to hunt down and ride some of the most deadly waves in the Southern Ocean.