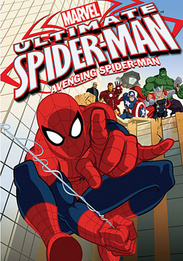 Over the past year, Peter Parker has been saving New York City from evil villains as the masked hero, Spider-Man while balancing his heroics with homework and friends. When S.H.I.E.L.D. Director, Nick Fury, offers Peter the chance to raise his game to the next level...to become The Ultimate Spider-Man, Midtown High becomes a secret operations base for young heroes under the watchful eye of Fury and the schoolâs new principal, Agent Coulson. Spidey takes on S.H.I.E.L.D. missions across the Marvel Universe, encounters new villains, and battles his biggest threat yet...teen high school drama, in this funny and actionâ packed new series!