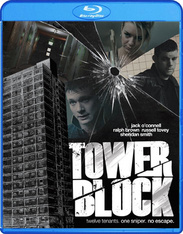 The residents of Tower Block 31 are terrified after witnessing the brutal murder of a young man. The case is left unsolved, due in large part to their collective silence. A year later, with their building marked for demolition, the witnesses begin to find themselves picked off one by one by a mysterious sniper out for justice. Pitted against not only the sniperâs deadly traps, but also each other, the residents must figure out a way to escape their own building... or die trying.