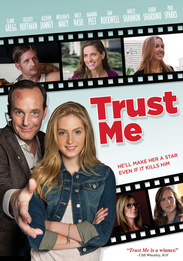 Trust Me tells the sharp, comic story of Howard Holloway (Gregg), a down-on-his luck agent for child actors and truly one the last good guys left in Hollywood. After discovering a 13-year-old acting prodigy (Sharbino), he is poised to close the deal of a lifetime which would catapult his tween client and, at long last, himself, into the big time. With the support of his gorgeous new neighbor (Peet), he must wrangle the actress' volatile, overprotective father, dodge a scheming producer (Felicity Huffman), and outwit his uber-slick nemesis (Sam Rockwell). As he arrives on the brink of the Hollywood dream that's eluded him for a lifetime, he begins to sense that his innocent young starlet may not be quite what she seems.