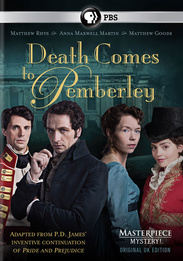 An adaptation of P.D. James' witty and inventive continuation of Jane Austen's Pride and Prejudice, picking up the story six years after the marriage of Elizabeth and Darcy. As preparations are being made for a ball at their magnificent Pemberley home, the discovery of a corpse brings an abrupt and shocking halt to the proceedings â and a threat to all that the Darcys hold dear.