Rise of the Krays 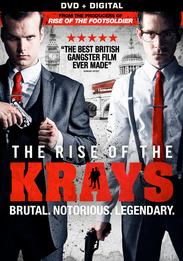 Twin brothers Reggie and Ronnie Kray got their start as amateur boxers and soon became Londonâs most feared and notorious gangsters. Told from the perspective of one of their closest friends, Rise of the Krays is the story of their rise to power and their bloody and violent reign.

Rated R for brutal bloody violence throughout, language and some sexuality/nudity.