The Americans: The Complete Fourth Season 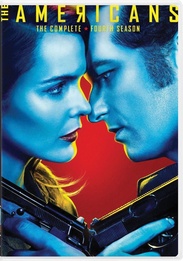 The stakes have never been higher for KGB operatives Philip and Elizabeth Jennings (EmmyÂ® nominees Matthew Rhys and Keri Russell*) than in the pulse-pounding fourth season of The Americans. Still grieving the death of her own mother, Elizabeth berates Paige for telling her pastor about her parents' covert profession. A deadly bioweapon threatens Gabriel's life, and the couple shatters the lives of loved ones when Martha is told about "Clark's" true identity and Elizabeth betrays her friend Young-Hee. Meanwhile, Philip's involvement in a self-help cult and Paige's romance with Stan's son further challenge the Jennings' mission in this "best drama on television" (Alyssa Rosenberg, The Washington Post).