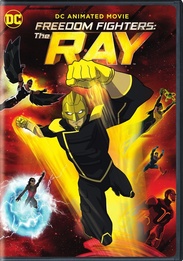 Earth X is one of many realities in the multiverse, with one glaring difference from our Earth; the Nazis won World War II! Led by The Ray, it is here that a group of heroes known as the Freedom Fighters lead the battle against tyranny. But when The Ray is transported to our Earth to save his life, he passes his powers to his unsuspecting counterpart, Ray Terrill. Supercharged with super human abilities, this newly christened The Ray must adapt and overcome the challenges of crime fighting, albeit with a little help from The Flash and Green Arrow. Seasoned and ready to fight, The Ray now faces his biggest battle, a return to Earth X to lead the Freedom Fighters against Overgirl and her evil Nazi henchmen!