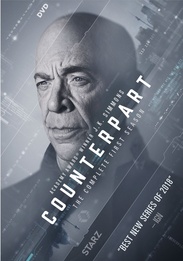 Howard Silk (J.K. Simmons) is a lowly cog in the bureaucratic machinery of a Berlin-based United Nations spy agency. When Howard discovers that his organization safeguards the secret of a crossing into a parallel dimension, he is thrust into a shadow world of intrigue, danger, and double cross . . . where the only man he can trust is his near-identical counterpart from this parallel world. The show explores themes of identity, fate, and lost love, posing the eternal question, "What if our lives could have been different?â