Dauntless: The Battle of Midway 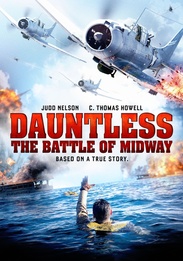 By June 1942, the Japanese Navy has swept across the Pacific. In an effort to change the course of the war, a United States carrier group is positioned off the coast of Midway, tasked with springing a trap on the enemy. During this pivotal battle, the two-man crew of a U.S. Navy dive bomber is forced to ditch in the sea. Set adrift, the men look towards their comrades for rescue.