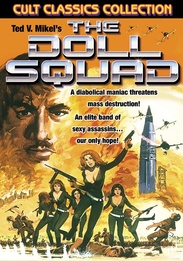 An elite team of beautiful special agents with license to kill - and kill again! A diabolical madman threatens the world with a deadly plague virus!

Eamon O'Reilly and his private army of mercenaries have already destroyed a manned American spacecraft during lift-off, just to show they mean business. But what chance does O'Reilly's army have against a highly trained and beautifully tanned team of brainy and brutal babes with machine guns?