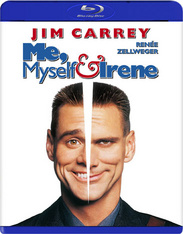 An outrageous comedy from the Farrelly Brothers, the film centers around a mild-mannered Rhode Island cop (Carrey) with split-personality disorder who escorts a woman (Zellweger) back to her home town. The cop and his hyper-aggressive alter-ego both fall in love with the confused lady, and he wages war - with himself - for her affections.