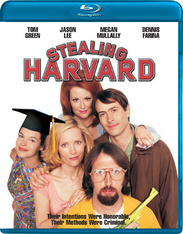 "Stealing Harvard" is set against the backdrop of Harvard, America's most prestigious university and home to the world's greatest minds. It's a place where some trailer park families -- like John's (Jason Lee) -- could never afford to go. But now, John's niece has the chance of a lifetime, and all she needs is the tuition that he had promised to pay if she got into a good college ... $29,879 ... which he doesn't have. When John turns to his clueless friend Duff (Tom Green) for help, they wind up doing all the wrong things for all the right reasons.