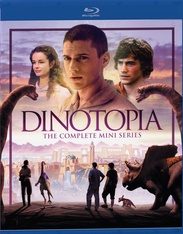 When a plane their father is piloting goes down in the Caribbean, two brothers find themselves stranded on a lost continent where humans and dinosaurs live together in an almost utopian society. The brothers are welcomed into the society and they both fall in love with the mayor's daughter. Things seem to be going well until the sunstones, the force of all life in Dinotopia, start to fail mysteriously. Now, the brothers must lead an expedition to the World Beneath to save their new home.