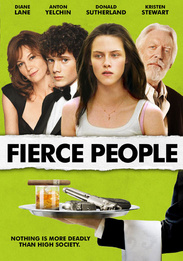 Contrasting the mores of high society with the blunt savagery of primitive tribes, FIERCE PEOPLE takes an inside look at the upper classes, examining the darkness that lurks beneath the surface of good manners. Sporting a biting wit, and featuring charismatic performances from Diane Lane and Donald Sutherland, this unflinching drama exposes the trappings of wealth and privilege, and their overwhelming power to both seduce and corrupt.

Rated R for language, drug use, sexuality/nudity and some violence.