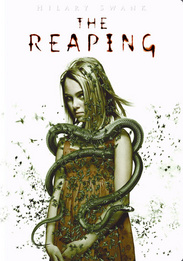 Hilary Swank plays a former Christian missionary who lost her faith after her family was tragically killed, and has since become a world renowned expert in disproving religious phenomena. But when she investigates a small Louisiana town that is suffering from what appear to be the Biblical plagues, she realizes that science cannot explain what is happening and she must regain her faith to combat the dark forces threatening the community.

Rated R for violence, disturbing images and some sexuality.