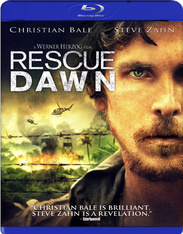 Based on the true story of German-born Dieter Dengler, who dreamed of being a test pilot and thus made his way to America, where he joined the military in pursuit of his obsession to fly.

On his first mission in Vietnam, he is shot down and captured by Vietcong guerrillas.

Rated PG-13 for some sequences of intense war violence and torture.