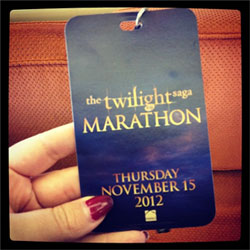 Editor's Note: We have been looking to expand our blog posts so we asked our pal Dannette to contribute to the site. She's a very passionate movie fan. After reading this I think you'll agree she's a great writer as well. We hope to have more from her very soon! --Tim

On November 15th, I, along with a few girlfriends attended the Twilight Marathon. This means that we sat in a theater for 12 plus hours, watching all 4 Twilight movies back to back, leading up to the opening of the 5th and final "Breaking Dawn part Two" showing that evening. I bet you think I am a hardcore fan... or Twi-hard as they say... well, not quite. Or am I?

When I first saw a Twilight poster hanging in a friend's cubicle at work, not only had I never heard of it, I had no idea that it was a book series. I thought it looked like some cheesy teen flick. Although I watch all types of movies, I generally do not like romantic movies with the exception of a few. While I'm not a vampire hater, I've never shared the fascination with vampires that some do. I chalked it up to another teenage craze and stayed away from it almost purposely. I have to admit I felt kind of sorry for anyone getting swept up in such silliness. OK I'll say it. The movie snob in me felt above it all.

So one night I took my girls to the video store. It was the weekend that Twilight New Moon was opening in the theater and of course we were surrounded by Twilight fever. As we looked for a movie to rent, I saw the first Twilight on the shelf. Something in me wanted to find out why all of my girlfriends were going in groups over the weekend to see "New Moon". My girls had not expressed any interest in Twilight yet, and when I asked them if they wanted to rent it, they seemed to be thinking the same thing I was. Together we decided to see what all the fuss was about. 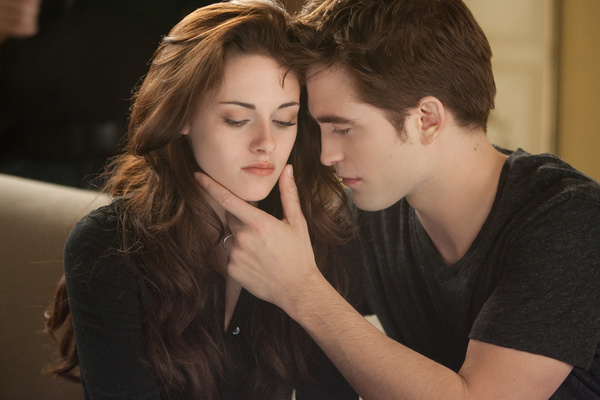 We went home and watched the movie together. When it was over, we turned to each other and asked embarrassingly, "you want to watch it again?" I don't know what came over me. I knew that the storyline was unrealistic and terribly convenient; I knew that it was a bit overly acted, even a bit cheesy. The romantic in me didn't care one bit. I was seduced by the meadow of purple flowers, the shimmery Edward who was painfully in love with Bella, the star-crossed love story, and the superb soundtrack. I knew instantly that I had been bitten.

I then moved on to the books because as we all know, movies can never take you on the same journey a book can. Again, I found the books to be almost ridiculous... but I could not put them down. I even went online and read the unfinished "Midnight Sun" (Twilight from Edward's point of view). What was wrong with me?? I was almost ashamed of myself.

Now I have always been a firm believer in never hiding or apologizing for what you like. I generally let my flag fly high... but I found myself hiding the fact that I had immersed myself in the Twilight world. I was one of "those" people! That didn't last long though. I finally just accepted that Twilight is a guilty pleasure. It doesn't have to be an Oscar contender to be enjoyable. I guess the movie critic in me was a little ashamed because the movies are a bit, well, bad. The acting isn't always up to par, the story is ridiculous at times, and there are even talking dogs at one point. But dang are they fun to watch. When the marathon tickets went on sale, I knew that I had to go. 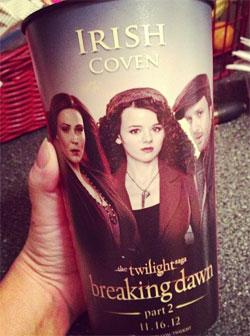 Even if you aren't a Twilight fan, I bet a tiny part of you is wondering what it's like to sit in a movie theater for that long. Well, I can tell you that it is a much more relaxed and fun experience than going any other time. Everyone is different, you have all ages, male and (mostly) females, but there is a common ground established. You are all in this little safe place where there is no judgment and you can just enjoy the experience together. Everyone proudly wore their Twilight lanyards (supplied by the theater) and armed ourselves with our giant, refillable, collectible cups of soda. Some people brought blankets and wore pajamas & slippers. The theater was very accommodating, letting us leave and come back with food from outside of the theater during the breaks in between each movie. And even though we aren't supposed to use cameras in theaters EVER, nobody cared if you took a few pictures. My girlfriend and I took pictures of the title opening of each movie to Instagram for fun.

There is a different energy when you attend an event like this. It's kind of like you are sitting in a giant living room watching with a bunch of friends. When the first movie started, there was excitement and some clapping and a few woo-hoos that seems to say, "Here we go!" You heard sighs when Edward first appeared, and some hollering when Jacob took his shirt off. There was a lot of outward laughter as our beloved Charlie (Billy Burke) delivered his sweet and endearing one-liners, and muffled laughter as the wolves start to talk to each other. In between each movie, they had fun little interviews taped exclusively for the marathon with Elizabeth Reaser (Esme Cullen), Jackson Rathbone (Jasper Hale), Nikki Reed (Rosalie Hale), discussing what it was like experiencing the mania that ensued after the movies came out. 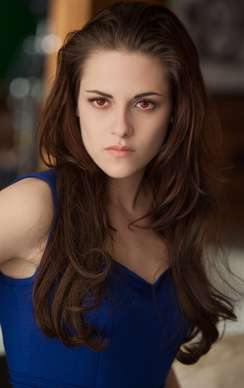 As Breaking Dawn Part One ended around 9:30, the theater really started to fill up for Breaking Dawn Part Two as it had sold out earlier in the day. It sure was nice to have a primo seat as I came back from getting my third refill in my giant collectible cup.

We started the marathon at 11:30 am, and there we were ready to watch the last one at 10:00 pm. We made it and I wasn't even tired. After seeing Bella open those red eyes at the end of BD P1, I seriously couldn't wait to see her get off of that table looking FIERCE. My girlfriend and I took our last picture of the night and we settled in for the home stretch.

In the books it talks about how beautiful Bella is as a vampire. After her wedding hair and make-up that didn't live up to the description in the books I was a little worried. That worry was quickly abolished the minute she got up from the table. Everything from her eye shadow to her super thick and long eyelashes to her flawless complexion and her fabulously full and stylish hair to her classic wardrobe was exactly what I had pictured and wanted to see. This is what I had been waiting 9 hours for and boy did they deliver.

Of course they didn't spend as much time on Bella learning to be a vampire as they did in the book, which is where I think I should mention there are many Twi-hards that dislike the movies because they gloss over things in the book, or sometimes take liberties with the story. You have the same problem with the Harry Potter and Hunger Games franchises. What these book readers fail to realize is how hard it is to turn a book in to a screenplay and for a director to get all of the beloved facts and experiences they know you want to see conveyed on screen in a timely and rhythmic manner. Try not to read the book right before you see the movie, you will only be disappointed at what they have to leave out in order for the movie to not turn in to a 6 hour mini-series. (Now that Lionsgate has bought Summit, we might still see that!)

There are a few highly charged scenes where Bella is growling mad, and Kristen Stewart almost seems to grunt the dialog. I'm not a K-Stew hater, but she can be a little hard to take as an actress. She has these really awkward pauses before she speaks, and when she finally does it's in a jumpy, stutter-y, blink-y sort of way. It kind of looks like she is trying too hard to look natural, but instead it comes off a little spastic. With that being said, I do accept her as Bella, and at this point, I couldn't see anyone else in the role.

The movie goes on pretty much like the book, with the exception of a great twist at the end which created mass shock in the theater with some verbal rejection that turned to stunned silence and then roaring applause and disbelief. My heart was literally racing. When I took my girls to see it the other night, they had the same reaction, and I did again too! I don't want to spoil it for you... you need to experience it for yourself.

The movie ended in Edward & Bella's purple flower laced meadow, where Bella has finally learned to show Edward her thoughts. We are treated to a lovely montage of images of Edward & Bella from all five movies. We then are reminded, as they flip through pages of the book that started everything, when they highlight the last word, forever, that it's all over.

During the credits they showed a still of every actor from every movie which felt sort of like a goodbye. I cried the entire time. I guess it's true; I'm one of "those" people.

I honestly had the best time and I would do it again... which I actually plan to do with my little brother and the Lord of the Rings marathon when The Hobbit opens in December. What can I say? I let my flag fly high. 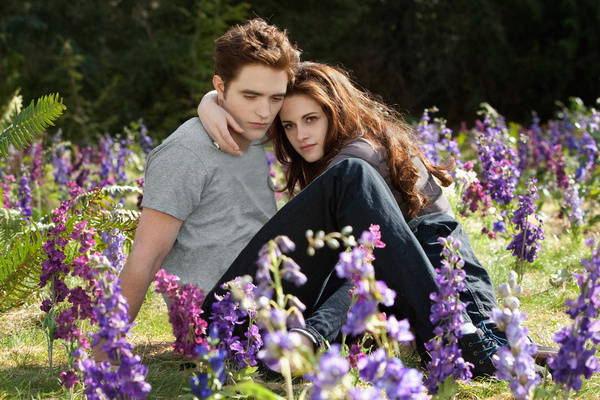