'Frank' may be the oddest film of the year 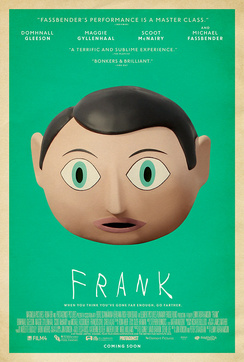 And I mean that in the nicest way possible.

How do describe a film that stars Michael Fassbender, but you never get to see his face. Well I assume that you don't see it for a large part of the film based on this trailer, if at all and yet I totally want to see this movie. It takes some rather big brass cajones to cast one of Hollywood's hottest faces amid a breakout stretch of films and not show his face.

Don't worry, the trailer below makes it perfectly clear who is wearing the mascot head throughout the whole film, but you know that there will be people seeing this film without that knowledge. I imagine that it will eat at them the entire time trying to figure out who is wearing the bobble head.

That leads to a more interesting conversation about whose experience will be more enriching, the person who knows that it's Fassbender the whole time or the person who gets to have that "Aha" moment in the theater. But, that's a conversation beyond the scope of this story.

The film seems to stand on its own thanks to the performances from Maggie Gyllenhaal and Domhnall Gleeson. It's weird to think of Gleeson as a newcomer as he was in both of the last two Harry Potter films and recently cast as a lead in Star Wars: Episode VII and yet, he's pretty much unknown to American audiences.

Obviously, that's going to change in the coming 18 months, but this looks to be a great way to get to know the soon-to-be Star Wars actor. Frank hits theaters on August 15.

Speaking of Star Wars, we came across this bizarre trailer and didn't really have a place to fit it after the MMM was published, but it was too good not to share. It's a mashup of Star Wars and the Guardians of the Galaxy.

I know what you're thinking and I was skeptical too, but it really is hilarious.