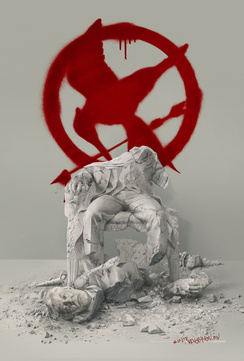 This war has been brewing and simmering over three films, but it looks like we'll finally get what we've been waiting for when The Hunger Games: Mockingjay Part 2 is released. I suppose that's what happens when you take a trilogy of books and stretch them into four movies.

Mockingjay Part 1 was a bit of letdown naturally as it was really only half of a story, the exposition heavy stuff that gave us an emo Katniss Everdeen struggling to find her place in a post-Hunger Games world. Not surprisingly, Mockingjay Part 1 was the least grossing film of the franchise, the only one not to surpass $400 million at the box office.

Also not surprising is this drop-off that I call the "penultimate dip." While the Twilight films consistently earned $300 million at the box office (after the first one), Breaking Dawn Part 1 "only" made $280 million. Likewise for Harry Potter, Deathly Hallows Part 1 dipped under the $300 million mark despite its predecessor having surpassed it.

The good news for these franchises is that the ultimate payoff is worth it. The final chapter always bounces back. In the case of Deathly Hallows Part 2, the bounce back was quite significant to a franchise high box office take of $381 million. So, will we see a similar return to form from Mockingjay Part 2?

After seeing the trailer released this week, I think that's a safe bet. And why wouldn't it? They purposely left all of the key action sequences and plot twists for the last installment and while there wasn't enough material (in my opinion) to give the first half any real weight, the concluding events that lie ahead more than make up for the disservice of splitting the last book into two films.

The Hunger Games: Mockingjay Part 2 debuts in theaters on November 20