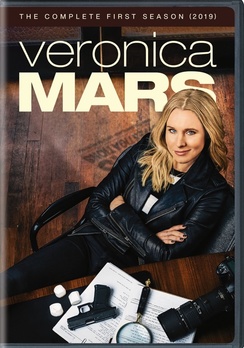 Warner Bros. Home Entertainment provided me with a free copy of the DVD I reviewed in this news story. The opinions I share are my own.

This week's Veronica Mars: The Complete First Season is really the fourth season of the weekly noir procedural. Oh, and there was a movie tossed in there to boot. So, why not simply call it "The Complete Fourth Season"? I'm sure there are legal reasons.

Veronica Mars was produced by Warner Bros. Television, but the first two seasons debuted on the now-defunct UPN, a TV network bolstered by rival studio Paramount. Season three ran on The CW, which is really an odd bastardization of UPN and The WB. Warner Bros. initially passed on the movie before the stars and director Rob Thomas took it to the fans as one of the most highly successful Kickstarter film projects.

Naturally, Veronica Mars came home to roost when it was time for its debut on home entertainment, but when rumblings started to churn about a reboot, the studio was surprisingly quiet, despite the show's clear appeal to The CW audience. So, Hulu (which was initially an NBC Universal and News Corp, i.e. Fox partnership) stepped up to bring Marshmallows' dreams to fruition earlier this year.

Of course, by now, Disney is the majority stockholder in Hulu and with its acquisition of Fox earlier in the year, anyway, as you can see this show's provenance is a mystery worthy of the talents of Veronica Mars herself, and given that star Kristen Bell also happens to be the star of a very successful Disney animated franchise with a sequel out next month (Frozen II), it's probably likely that we will continue to see more seasons of Veronica Mars soon.

Phew, time to take a breath.

For season four, or season one redux, or the reboot season, the show's protagonist Veronica Mars returns to her quaint, albeit crime-riddled, fictional California seaside town to continue working as a private investigator with her Dad. When the town's lucrative tourist industry is threatened after the murders of spring breakers, Veronica leaps into action doing what she does best, solving crimes while providing plenty of sarcastic barbs.

Admittedly, I was late to the Veronica Mars party. The show came out during a period of my life when I wasn't really into TV melodrama. But thankfully, my wife quickly put me through my paces with extended binge-watching sessions of Buffy, Angel and yes, Veronica Mars.

I was kicking myself from the first episode for not giving this show a serious watch when it was airing on TV. By the time the movie came out, I was all caught up and counted myself among the most ardent Marshmallow out there. The film was fun and certainly played into the charm and nostalgia of the show, which was still fairly new to me. So, while I certainly enjoyed the movie, I was aching for more.

Veronica Mars works best in a longer serialized form that is best delivered via episodic television. Veronica Mars: The Complete First Season was just the return to form that I was looking for and I am happy to report that it is a compelling watch for longtime fans, new fans and even those turning in to the show for the first time.

That was the thing about this reboot that I was thoroughly impressed with. While it certainly was a continuation of the character that we came to love in her high school and college incarnations, this adult version of Veronica Mars is fully fleshed out in a way that makes the show accessible for those that still think marshmallows are simply for s'mores.

I also thought that the show was an ambitious reboot that tried to capture the intervening years of its audience by creating a more adult show. There are several themes in this season that continue the disparity between the haves and have nots in Neptune, but I couldn't help but make a real connection between Veronica Mars and Big Little Lies.

Of course, Veronica's humor is much more caustic than anything you would find in Monterey, California, but it also wouldn't surprise me one bit to see a cross-over between these two Warner Bros. properties where Veronica is called in to solve the latest murder in Monterey.

That being said, the spirit of the show remains the same and the easy camaraderie among the cast is the best selling point of this series. Enrico Colantoni is the unsung MVP of the show as Veronica's dad while Jason Dohring's Logan is the perfect would-be paramour for Veronica.

While these two actors along with Kristen Bell do the lion's share of the heavy lifting in the series, it would be an injustice not to mention the varied guest stars and supporting actors and actresses that have helped to create the international sensation that is Veronica Mars. Several of them, including Max Greenfield return for this reboot season which only helps to give this season the gravitas that it deserves.

Whether you're a card-carrying Marshmallow or only discovering the series for the first time, you will want to own Veronica Mars: The Complete First Season on DVD today.