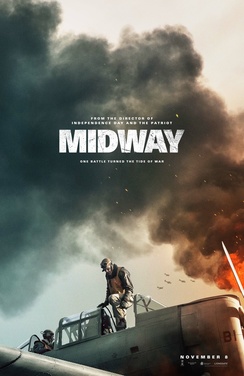 Do you remember how long the actual attack scene was in Michael Bay's Pearl Harbor? Well, the movie clocked in at over three hours, but they only spent about four minutes on the actual battle upon which the film is named.

That's not a knock per se on Pearl Harbor as it's a film that I enjoyed thoroughly and continue to find that it holds up all these years later. But rather, it's an illustration at how different movies can use different techniques to convey the same message, even if the emotions differ.

By contrast, Midway opens up with the bombing on Pearl Harbor and spends over twice as long as Bay on this pivotal battle. It also serves as a brilliant companion piece to Pearl Harbor as modern-day classics that highlight different ends of the spectrum in terms of the United States' involvement in World War II.

Midway recounts the pivotal clash between the American Fleet and the Imperial Japanese Navy that marked a critical turning point for the American forces in the Pacific Theater. Six months following the events of Pearl Harbor with American forces embattled and crippled in the Pacific, the United States scored a major victory that would eventually lead to a convincing victory over Japan.

John Ford. Yes, that John Ford was positioned on Midway Island during the Battle of Midway and he eventually cut his footage into the seminal war documentary The Battle of Midway. It was part propaganda, part cinema-veritÃ© but all John Ford. It's available on YouTube and I strongly recommend that you check it out. Not only is it a must-see film for anyone looking to go into filmmaking, but it's an early look at the power of the moving image.

This look at actual battle footage was among the first that Americans were able to view that actually showed a victory for the home team. In typical John Ford fashion, his final product included a score, a voiceover and added sound effects. And yet, the striking visuals are on full display. It's these visuals that director Roland Emmerich faithfully recreated in his latest film.

Known as the director of Independence Day, Emmerich is no stranger to big-budget special effects. While his earlier film relied more on practical effects and models, the special effects in Midway were almost entirely computer-generated. Despite the use of CG, the end result is a film that is timeless and a faithful retelling of a battle in which many people are already fairly familiar with.

Despite his previous effects-heavy extravaganzas, Roland Emmerich instead opts to put the focus of his lens on the actors themselves. From Woody Harrelson to Patrick Wilson to Luke Evans, they are all playing real life heroes and their stories of courage and bravery don't need any extra polish to leap off of the screen. It was a different time and these men didn't think twice about risking it all to insure that our way of life persevered. It's a debt that we continue to pay to this day and with Midway we are given the opportunity to focus in a few of these brave young men.

One interesting thing that I took away from this film is just how much time they spent on the Japanese view of these events. If there was one criticism of Pearl Harbor, it was the way in which they manipulated events such as attacking the hospital to paint the Japanese as more evil than perhaps was deserved. That's not to say that there are any saints in war, but Japan is a country bound by an ironclad code of honor and it was a bit unsavory for Michael Bay to tweak history for his own storytelling mechanics.

From all accounts, Roland Emmerich painstakingly made efforts to provide as much balance to the story as possible. While it's near impossible to get into the heads of the Japanese during the events of these six months, I think that Emmerich did an admirable job of being fair to both sides. At the end of the day, Midway is as much a story about Japan as it about the United States. Sometimes it is easy to forget that history always has more than one author.

All in all, Midway is a story that needs to be told and this version is one that does so with historical accuracy in mind. In a world where we are constantly bombarded by "fake news" it's refreshing to see a filmmaker stick to his guns, thorns and all.

Midway is now available on 4K UHD, Blu-ray and DVD.